Have a glance at the ground of the internet. It was just a couple of computers connected by buses and capable of carrying little bits and bytes between them. And today, here we are, reading this article even in a toilet without a wire connected to the device on which you are reading this article.

With the help of the latest innovation in technology and tech influencers including Elon Musk, Jack Dorsey, Mark, etc., the world has now extensively changed. These innovations in technology have filled various aspects of distance in human life.

Printing Press, one of the biggest innovations in the 1400s had filled the “Knowledge” gap. Earlier, someone from the governance of the king was providing knowledge under the name of that king. The printing press was invented and completely closed this knowledge gap.

Today you can transact and connect with anyone, everywhere, and anytime on this planet. But that’s not the end where the unconscious human mind should stop, right? Therefore today, we are going discuss the most undervalued and unconsidered existing that can be filled by an ingenious innovation known as “Blockchain” — with a motto:

If you cannot explain it simply, you don’t understand well enough. – Albert Einstein

The blockchain is going to change the way we “Trust”. I think you are having confusion that we trust each other, we trust banks, we trust society then what is this trust we are talking about, isn’t it? Well, we are talking about trust that is a core factor of business, which is a foundational currency of commerce. We, probably 7.6 billion people, are making around 100 trillion transactions based on this manufactured trust that is easily breakable though.

We have invented “Ledger”, a fundamental way of storing transactions made today. It is similar to the library where all human beings’ history has been stored. On the other hand, while constructing and modifying a brand-new house, all expenditures are stored on this ledger.

But, while buying from a seller, he might have changed one of those records within the ledger as it can be edited, who knows! Meaning, this ledger cannot be trusted, one can add while one can remove records too. And that’s where intermediaries were brought in place.

These intermediaries are responsible for keeping a centralized copy of ledgers in all of the commerce and they facilitate the brokering of the relationship between those who are looking to trust and those who are looking to be trusted such as banks, payment gateway agencies, etc. Now you are losing your trust whom you had trusted. To solve this tremendous trust gap, blockchain comes into the picture.

The blockchain is the technology that enables transferring digital assets like Bitcoin, Ethereum, Litecoin etc. from an individual to another anywhere on this planet at any instant of time with the help of distributed ledger in a secured manner. Do remember, bitcoin is not blockchain.

Blockchain does not solve only the problem of intermediaries for money transfer like Visa, MasterCard but it solves every problem that exists in various aspects of life that need intermediaries. The easiest explanation is described below.

You May Also Like This -   Deep Web vs Dark Web: What Is The Difference?

For example, Harvey in New York wants to send $50 to Mike residing in India. This is typically done by using third parties that receive a request from Harvey and identify Mike’s account in India. After identification, it will move Harvey’s $50 which will effectively be $40 after taking the fees for their services. Additionally, it can take up to 3 or 4 days too. But what blockchain is attempting to solve is,

How the heck does Blockchain work?

I will explain the concept of blockchain using 2 different concepts of ledger including conventional ledger we use and revolutionary blockchain ledger.

Concept of the Open Ledger 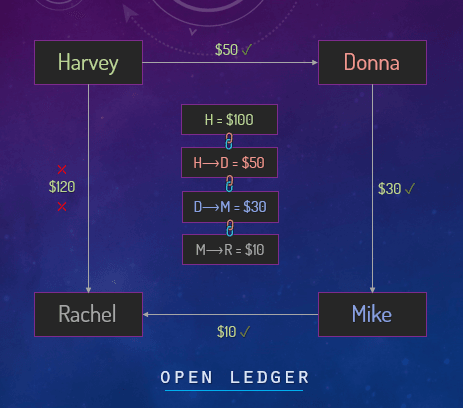 To understand the concept of the open ledger and how it is being implemented on the blockchain, let’s assume that we have a network of four people namely Harvey, Donna, Mike, and Racheal. At the moment of inception of the network, Harvey has $100 from the beginning and which has been recorded on the network.

Now, Harvey makes a transaction of $50 to Donna[H=>D{$50}] and this transaction is now going to link with the already existing transaction. (H=$100). Similarly, when Donna makes a transfer of $30 to Mike[D=>M{$30}], it will add to already happened two transactions. 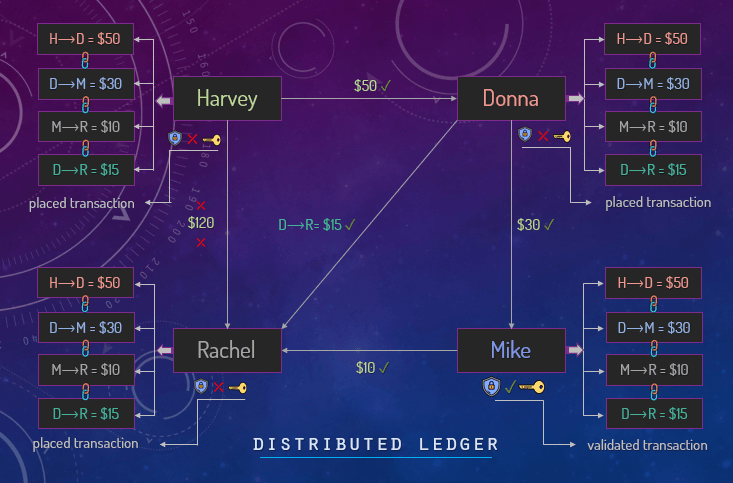 In a distributed ledger, blockchain is going to trade centralized to distribute across the nodes into the network. Meaning, Racheal can have a copy of the open ledger and can hold it. In fact, anyone participating in the ledger can hold the chain of events(ledger) as it happens. Eventually, we have eliminated the need for third parties. But using blockchain technology, we need to make sure that all participants in the network see the same copy of the ledger. Let’s understand how these nodes are synchronized with each other.

In a network shown above containing distributed ledger, suppose Donna sends $15 to Racheal. Now node D will publish and broadcast this intended transaction to the network. This is yet an invalidated transaction and everyone within the network can see it. In order to get this transaction validated in the ledger, the concept of miners comes into the picture. Minors are special nodes that can hold the ledger. Let’s take H, D, M, and R are minors and the first minor who validates the transaction and adds to the ledger will get a financial reward. The validating transaction is a process of,

You May Also Like This -   Cardstack: The Experience Layer of the Decentralized Internet

The first step is easy to do. But for the second, minors need the computational power for searching a special key that matches/solves the complex problem of adding a new transaction. As these keys are random it will take time and the first one who finds this key will get a financial reward. This minor will publish this transaction with the found key in a public ledger to broadcast the newly created transaction.

Now all minors can see this transaction is validated and the key has already been found, they will add this transaction to their ledgers as there is no meaning of finding the key which has been already found to get a reward. On the occurrence of every transaction, these minors solve complex mathematical problems and add transactions to the public ledger.

These types of chains can be created in different areas of interest such as health chain, real estate chain, financial chain, etc. If one temper with particular records, it will be replaced by a copy of that record because the entire industry will be operating within the same chain.

Why do we need Blockchain?

The conventional trust gap that we just discussed is actually increasing nowadays. Today we are not transacting with only human beings but we transact with smart devices and that’s the increasing trust gap we were talking about. As per one prediction, we will have 7 times more smart devices than the global population by 2023 and we will have to trust them.

Another manufacturing of trust by people that includes a quarter a million rides that are happening between Uber and Lyft, hundred thousand online transactions occurring per day on Alibaba, Etsy, Amazon, etc., hundred and fifty thousand rooms that are rented per night on Airbnb and we are putting our lives at risk every day.

The blockchain is not only about eliminating intermediaries but also about establishing trust companies that will replace every other company in the world. For example, we buy tangerines from a store based on logo/trust provided by some standard reputational and authorized agencies.

What if one glues that logo downloaded from the internet! But what we do is just trust that logo in spite of having an actual idea of where it comes from and make ourselves unhealthy.

But imagine a tangerine company comes with blockchain implementation by providing a QR code. Now when I scan that QR code, it reveals all of the transactions that happen in that tangerine farm including the types of seeds and farm they were born from, the farming process applied during harvest, pesticides used while growing them, etc. — all of this on the transparent and indestructible blockchain so that I can trust. Now, which tangerines will you buy?

That is the power of blockchain.

That is the power of distributed ledger where you know someone can’t temper the information being recorded. With the future of blockchain, every company in the world will be having a competition with blockchain versions of themselves!

This is the difference between how we exist today as commerce and how we will exist tomorrow.